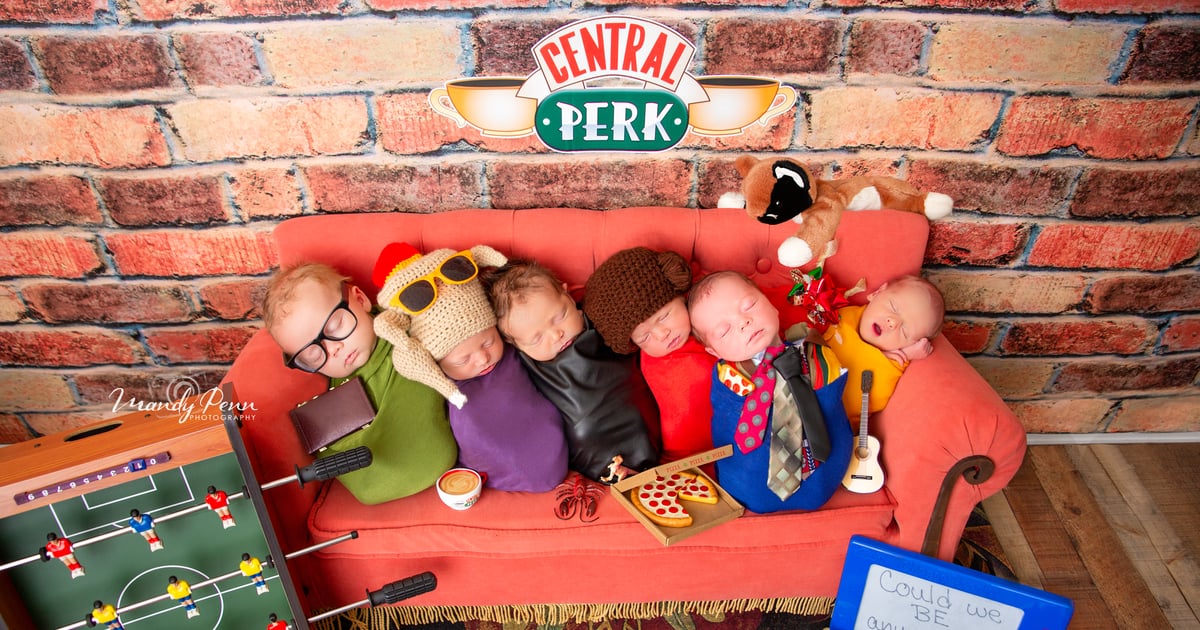 Nearly 30 years after its premiere, most of the world is still very much in support of watching Friends reruns for the rest of time. Over its 10 seasons, viewers fell in love with Rachel, Monica, Ross, Chandler, Phoebe, and Joey - their many quirks and all of the memorable moments between the close-knit group. Photographer Mandy Penn is "obsessed with Friends" and can talk about the show for as long as you'll let her, so four months into taking photos of newborns, she decided it was time to showcase the sitcom in an adorable themed shoot that would go on to turn out so much more authentic than she ever thought possible.

With inspiration sparked by her gym buddy and fellow Friends-lover, Alli - who had just had a set of twins (aka Monica and Phoebe in the solo photos ahead!) - and the help of her mentor in newborn photography, Melissa Stynski, Mandy took a small grain of an idea and turned it into a full-fledged shoot with six babies.

First, Mandy and Alli made a list of the props that they knew they wanted, and among the gems they came up with, Mandy knew they also needed the famous Central Perk couch. Thanks to her friend Danielle of Sincerely Danielle Shunk, she got a fully upholstered mini couch in exchange for a lifetime of photo shoots for Danielle's family (worth it!). She also got a ton of crocheted props - like the epic turkey head and Rachel's Princess Leia buns - from another friend.

Then, because Alli only had two babies and the shoot was shaping up to be bigger than originally imagined, Mandy put out a call for four other babies so that they'd have all six friends in a group photo in addition to the solo character features and a few special shots containing multiple friends (spoiler: there's one of Santa, Superman, and the Holiday Armadillo!).

"I'm not going to lie to you, when all six babies were on that couch, I actually shed a tear," Mandy told POPSUGAR. "It's just one of those things - when I put my passion into something, it does exactly what I want it to do, and it comes together exactly how I pictured it. It just made it better than I had the couch and all the props."

See the photos from Mandy's incredible shoot and all of the intricate details ahead - could these babies BE any more cute?!

Related:
I Can't Get Over How Insanely Detailed This Starbucks Newborn Shoot Is; Just Look at the Chip Bags!
Scroll for more
Continue reading on POPSUGAR...
Tags:
Facebook Share Trend