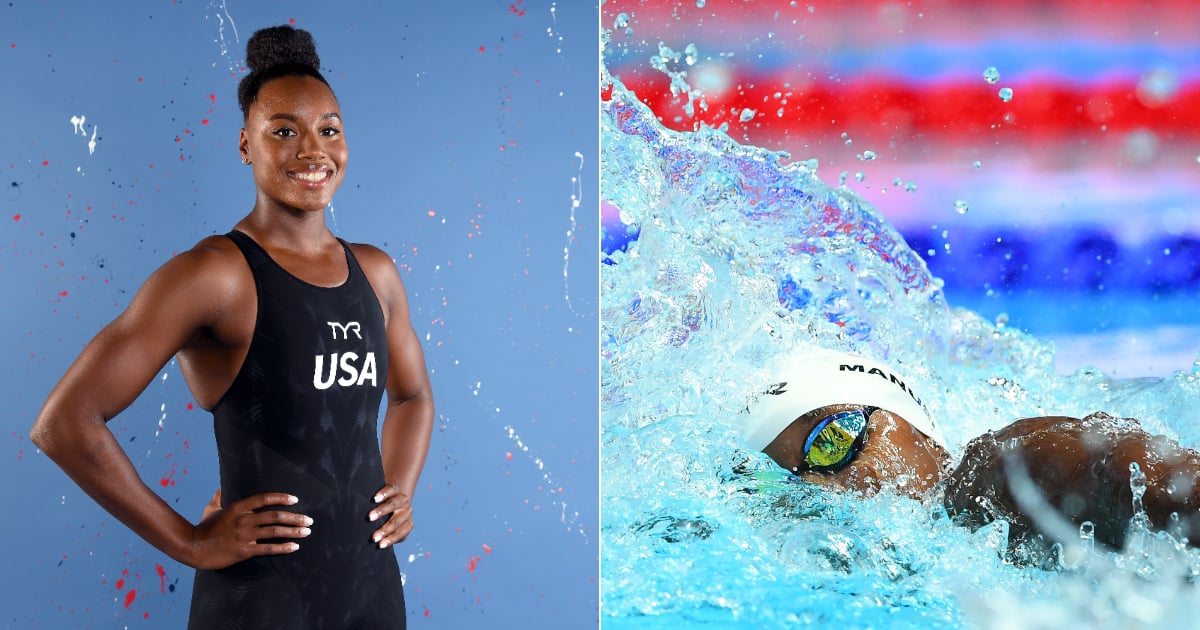 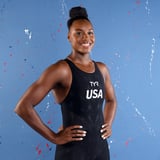 It seems like almost everyone has settled into a new sense of normal amid the COVID-19 pandemic. And, that applies to athletes training for the Tokyo 2020 Olympics, who were hit with another unique setback when the Games were officially postponed one full year. While some have taken time off from training and focused on home workouts, four-time Olympic medalist Simone Manuel's routine doesn't look too different.

Manuel told POPSUGAR during an interview about her partnership with BIC Soleil Sensitive Advanced Razors that her training is the same as it was before the pandemic - with some alterations of course. She still swims nine times and does three lifting sessions each week. The strength workouts have required the biggest adjustment since she's had to use equipment in her apartment. Manuel said she'll add resistance to bodyweight work with a medicine ball or weighted vest, and she also has a pull-up bar, BOSU ball, and Spin bike.

As for swim practices, Manuel revealed that she actually trains with two-time Olympian Katie Ledecky, who is also partnering with BIC. The two have access to a 25-yard backyard pool in CA (Manuel said that under typical circumstances, she alternates between practicing in a 50-meter pool, which is Olympic size, and a 25-yard one) - but both women take precautions. They each have their own lane, making it easy to swim apart and social distance from each other. Their coach social distances from them as well, "so it's really only three people in the backyard," Manuel explained, adding that they continue to keep tabs on their health.

Manuel said it's been great to train with Ledecky, who was also her college and Rio Olympics teammate, because they push one another. "It's also awesome to be a part of BIC Soleil Sensitive Advanced with her and be two athletes that inspire women and show them how important it is to have confidence in yourself," she noted (you can watch Manuel's BIC Soleil commercial here). "That's kind of what we're doing every day when we go to practice . . . just trying to maintain that confidence and that competitive edge so that when we get to the Olympics next year, we'll be ready to go and we'll be able to inspire women with our accomplishments."

"I also just want to go to the Olympics and inspire people to have confidence in themselves, to dream big, to work for their goals."

Manuel had an impressive showing at the Rio Games in 2016. She became the first black woman to win an individual Olympic swimming medal when she freestyled her way to a first-place tie in the 100-meter. She also took home a silver medal in the 50-meter freestyle and racked up another gold and silver in relay events: gold in the 4x100-meter medley and silver in the 4x100-meter freestyle. When it comes to her goals this go-around, they're similar to what they were before the Games were postponed, but the time she's spent social distancing, she said, has allowed her to reflect on those ambitions.

"I do want to elevate them," Manuel said of her goals, "because it's another year of practice and work and improvement, and I have already seen that improvement. So the hope is that even though I have specific goal times or specific placings, hopefully after we get through this experience I will have improved." Generally speaking, her eye is on multiple medals for Team USA.

Manuel wants to make another Olympic team not only to add more accolades to her name, but to motivate others. "What I've learned most, especially from being an Olympic medalist, is that we're able to just inspire people. And so for me, obviously I want to win some medals, but I also just want to go to the Olympics and inspire people to have confidence in themselves, to dream big, to work for their goals. And that is something that's so precious to me beyond just receiving a medal or breaking a record."

The Olympic trials for swimming will be held from June 13 to 20 2021 in Omaha, Nebraska, meaning Manuel has over a year's time to train. Currently, she says she's just trying to take it day by day. "It really is important to focus on the day and attack the day as best as possible and not get too bogged down by our uncertainties," she noted, "because the only thing we really can control is the situation that we're in now."

Related:
This Is How Olympian Simone Manuel Is Staying Positive and Taking Care of Her Mental Health
Scroll for more
Continue reading on POPSUGAR...
Tags:
Facebook Share Trend